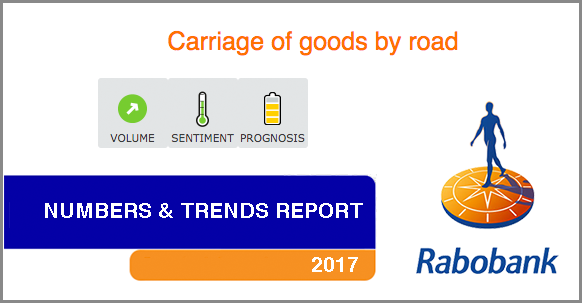 Outlook: the road ahead

In its 2017 Numbers & Trends Report for Carriage of goods by road, Rabobank expects to see a continued growth in volume of around 2 to 2.5% for the road transport sector during 2017. This growth is evident in areas other than export-related sectors like industry and wholesale. Rising consumer confidence, an improved housing market, and increased purchasing power will contribute to an increase in domestic demand for transport by road. In addition, the arrival of several major European distribution centres presents opportunities for further development.

Distribution services (especially conditioned transport, container transport, and construction-related transport) are experiencing substantial growth; however, competition remains fierce and prices do not rise proportionally with volume. The major trend in the sector is optimisation – accomplishing more with less. The strong growth in e-commerce has been beneficial to couriers, logistics service providers, and forwarding firms that aim for finely-tuned distribution.

Despite the promising outlook, the sector is facing several major challenges, namely: scale expansion, an evolving supply chain brought about by the rise of e-commerce and 3D printing, as well as both a quantitative and a qualitative mismatch in personnel. The largest transporters are establishing themselves as chain directors for their clients. Medium-sized carriers are thus compelled to distinguish themselves by delivering added value, for instance by specialising in a certain type of transport, product, or destination region, or by providing additional logistics services. This may include, for example, further development of conditioned warehousing and transportation of organic foods and agricultural products – an area that is experiencing strong growth. Smaller companies and sole proprietors remain a vulnerable group, which serves as sort of flexible shell surrounding the larger companies.

An increasing demand for more finely tuned distribution services also carries increased requirements of the internal organisation of companies. Rabobank’s research predicts a continued professionalization within the sector; opportunities will be afforded to logistics service providers and carriers that are able to relieve their clientele through integration along the logistics value chain. Collaboration and participation in a network are critical to achieving this. For those firms that are able to incorporate these challenges in to their overall strategy, the long-term outlook is moderately positive. Companies that lack this distinct capability and that offer little to no added value will only be able to compete on pricing, and will almost certainly see fewer returns.

Outsourcing of logistics • Outsourcing has been a theme within the transport sector since the 1990s, but these days it takes increasingly professional forms – and not just in transportation, but warehousing, repackaging, packaging, up through to control almost the entire logistics. The carrier is free to develop into a fully-fledged chain partner. Increasing complexity, as well as the increase demand for highly trained personnel, have helped make high-quality ICT and automation a must.

Modal shift and multi-modal transport have grown-up • With road transport being discouraged by the EU in favour of water and rail, successful carriers of the future will excel by offering multimodal transport in cooperation with road ad rail carriers, or by making their own investments in these modalities.

Innovation is a key issue • Technological advances will continue to change the logistics ecosystem in the coming years. Take for instance the rise of the 3D printer, warehouse robotisation, and autonomously-driven trucks – carriers will be compelled to assess the impact of these applications on their own business models and how to incorporate them. Likewise, changes to the supply chain will force transporters to innovate their business model. Key terms to consider here include: cost-flexibility, asset-light policy and cooperation – the last of which increases both market power, as well as profitability.

Sustainability plays a specific role in the business model

Road freight transport is a division within the transport sector. Businesses in the sector distribute goods by road on behalf of third parties. Generally, companies can be distinguished as either active in domestic transport or active in cross-border transport.

The following SBI code groups have not been included: other types of transport, logistics services for transport, freight forwarders, shippers and charterers, and other transport-related services.

Road transport is in an early cyclical phase

Due to its derived function, the road transport sector is typically sensitive to economic fluctuation. Transport follows trade and production – ultimately, all products must make their way to the end user. Consequently, import and export are crucial aspects of cross-border transport. Dutch transporters account for approximately 70% of domestic transport and 30% for cross-border transport, respectively. Of this foreign transport, half is accounted for by Germany and around 30% by Belgium.

Generally, a manufacturing or production company can choose to arrange its own transport, or to oursource. Nearly 70% of total freight transport in the Netherlands is currently provided by road carriage. More and more companies are choosing to focus on their core business offering. For years a trend towards outsourcing of non-core business activities has been increasingly apparent, and this trend is expected to continue. Moreover, this outsourcing is increasingly evident not just in the transport sector, but also in planning and inventory management. Road transport can be divided as such:

84% of all weight transported in the Netherlands is transported by road, 15% via water, and around 1% by rail. In cross-border transport, approximately 45% is by road, 49% by sea, and 6% by rail. Road transport has seen great improvement to its position in the past few decades, compares to other modes of transport. Flexibility and speed have played decisive roles. Despite political pressure on a larger share of water and rail sectors, road transport continues to see growth, in part due to the rise of finely tuned distribution from e-commerce.

Number of road hauliers is increasing

As of January 1, 2017, more than 106,000 license certificates were issued on behalf of more than 13,000 companies. In comparison with 2016, the number of outstanding certificates per balance increased by more than 4,249, an increase of 4.1%. On average, a Dutch transport company holds 8.1 licensees. To see more detailed information and statistics, visit NIWO.

Within the Dutch transport sector, 76% of companies possess five licensees or less. Together, these 9,000 plus companies account for more than 17,000 licensees, or 17% of the overall total. Within the industry, approximately 3,800 individuals are employed. Some transport companies could be characterised as self-employed drivers, meaning that an individual is employed as an (inter) national driver on his or her own account and risk. The largest 102 companies (which account for no more than 1% of the total number of companies) together possess more than 20,000 licensees – as much as 21% of the total.

Nearly one in five Dutch road freight carriers are based in South Holland (19%), followed by North Brabant (18%) in second place. The province of Gelderland (14%) is also home to a fairly large number of transport companies. In total, these three provinces account for more than half (51%) of all transport companies established in the Netherlands, and possess approximately 52% of all outstanding licensees. In the province of Flevoland, a mere 1% of all companies account for 1% of total licenses. Companies based in the North Holland province are the largest in the Netherlands, with an average of 10.5 licensees per firm. Transport companies in Zeeland, Groningen, and Friesland provinces are smallest, with an average of less than 6 license certificates each.

For access to the full Rabobank Numbers & Trends Report:Carriage of goods by road (publication only available in Dutch), click here.